Community of San Diego in California

Rancho Bernardo is a master-planned community[1] in the northern hills of the city of San Diego, California.

The community is a sprawling community with shopping centers, golf courses, and office parks typical of San Diego development located about 20 miles (32 km) north-northeast of downtown San Diego, immediately east of 4S Ranch, north of Carmel Mountain Ranch, northwest of the city of Poway, and south of the city of Escondido.

The pre-colonial history of this area is divided into an early (prior to circa 900 BCE) and a late period. During the late period, a village complex known as the Westwood Valley complex was located along an intermittent stream bed. The period of habitation is from around 850 CE to 1790 CE. The peoples believed to have occupied this site are the Kumeyaay (formerly known as Diegueno/Ipai), although there are strong traces of Luiseño as well.[2] This village was likely known to the Kumeyaay as Sinyau-Pichkara.[4] The area the village occupied is now under the western section of Ranch Bernardo near Duenda and Poblado Roads.

Rancho Bernardo is located on the Rancho San Bernardo Mexican land grant made between 1842 and 1845.[5]

In the 1960s, Rancho Bernardo was annexed by San Diego. The area was developed by AVCO Community Developers until their involvement ceased in 1984.[6]

On October 22, 2007, the Witch Creek Fire burned through Rancho Bernardo and several other populous areas of San Diego County, destroying hundreds of homes, and completely destroying several entire neighborhoods, particularly ones that firefighters had trouble accessing due to rugged terrain and rapidly advancing flames pushed by strong Santa Ana winds. The highly unpredictable flames pushed into the northeast section of Poway during the day, prompting evacuation of Palomar-Pomerado Hospital. The neighborhoods of the Trails, Montelena and Westwood were the main areas hit in Rancho Bernardo.

The Carmel Mountain Ranch/Rancho Bernardo submarket is the fifth largest office space submarket in San Diego County, with over 6 million square feet of office space.[7] It is part of an "I-15 edge city", edge city being a major center of employment outside a traditional downtown.[8]

There is an annual carnival-type street fair, RB Alive!, during the summer.[9] Rancho Bernardo is also home to the oldest-operating winery in the region, the Bernardo Winery, established in 1889 and family-owned and operated since 1927.[10] 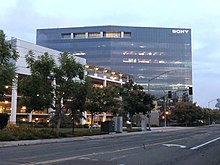 Rancho Bernardo is home to the corporate headquarters of Sony Electronics, Inc.[11] and a major office of Sony Interactive Entertainment, LLC. Other companies with a presence in the area include Broadcom, Hewlett-Packard, Microsoft, , Teradata, LSI Corporation, BAE Systems, ASML, Northrop Grumman and Amazon. Located in a 685 acres (277 ha) business park, there are approximately 50,000 workers employed by these companies.[citation needed]

The area is part of the Poway Unified School District.[12]